ADD To Compare
Add your review
GPUGPU Benchmark and Review 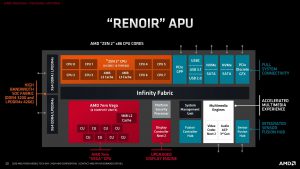 The AMD Radeon RX Vega 7 Graphics comes integrated with AMD Ryzen 7 4000 series CPUs and Ryzen 5 5000 series CPUs. Launched in January of 2020 the iGPU is based on Vega architecture comes with 7 CUs clocked at 1.6 GHz.

The Vega 7 graphics have a performance just slightly below Vega 8 graphics and is capable of gaming at medium setting with decent frame rates.

The performance of the Vega 7 Graphics depends on a number of factors such as the configured TDP (12-25 Watts), Clock Speed, Cooling Solution, and RAM configuration. The integrated GPU greatly benefits from fast dual-channel memory. The Renoir APUs now also support the LPDDR4x memory the gives the Renoir APU some performance.

The AMD Radeon RX Vega 7 (Ryzen 4000/5000 series) graphics have a performance that should be comparable to that of Nvidia Mx250.

Image editing applications such as photoshop should relatively smooth with vega 7 as it is paired with the 4000 series CPU’s which are great for editing workloads. So, if you are editing on a system with a 1080p display it will be a relatively smooth experience. However, if have are with a 4k display and simultaneously working with large files you will experience some lag.

The Intel UHD should be able to handle most modern games that are not very graphic demanding such as League of Legends, Dota 2, Minecraft, CS: GO, GTA 5, and Fortnite. But consider this it only has 15 percent of the benchmark performance when compared with industry-leading Nvidia RTX 3090.