The AMD Ryzen 5 5500U is a Mid Range processor for thin and light laptops based on Zen 2 architecture. The AMD Ryzen 5 5500U has 6 cores and 12 threads with a base clock of 2.1 GHz and can be boosted to 4 GHz. The chip is based on the Zen 2 microarchitecture and is manufactured on a 7 nm process by TSMC. The TDP of this Chip is specified by AMD to be at 15 Watts but can vary anywhere from 10 to 25 watts. The 6-core APU comes with integrated Vega 7 graphics and supports DDR4-3200 and Low power LPDDR4-4266 RAM.

The Ryzen 5 5500U trades blow with the likes of the 10th Gen Intel Core i7 10750H which is is high-end gaming CPU with a TDP of 45 Watts. This goes without saying it can easily handle your day-to-day tasks such as Browsing, Streaming, and using office productivity software. If your day-to-day workflow involves using video editing, photo editing, and CAD applications, the 5500U should have no problem handling such workloads. According to a lot of industry experts, it is just a rebranded 4600U since the performance is strikingly similar.

The AMD Ryzen 5 5500U is powered by the Vega 7 Graphics which has a performance comparable to that of Nvidia Mx250 with 2GB of graphics memory and slightly below Vega 8 graphics and is capable of gaming at the medium setting with decent frame rates. That being said performance of the Vega 7 Graphics depends on a number of factors such as the configured TDP (12-25 Watts), Clock Speed, Cooling Solution, and RAM configuration.

How is AMD Ryzen 5 5500U for 3D Animation and Rendering

We see that the AMD Ryzen 5 5500U performs slightly better than its intel counterparts with a massive lead in multi-core performance and only losing to intel in single-core performance with significant margins. Overall AMD Ryzen 5 5500U has a performance similar to that of AMD Ryzen 7 4700U and is significantly better for rendering and encoding than its intel counterparts with only losing to intel in software responsiveness under active workloads.

In the blender benchmark, the AMD Ryzen 5 5500U beats its intel and its 4000 series counterparts with huge margins

Based on cinema 4d the Cinebench R20 measures CPU performance in animation, 3d-modeling, simulation, and rendering. Single-core performance measures the responsiveness of the software under active workloads while the multi-core score measures the CPU’s ability to handle tasks such as rendering, encoding, and other workloads that benefit from better multi-threaded performance. In Cinebench R20 single-core benchmark the 11th Gen Intel Core i5-1135G7 beats AMD Ryzen 5 5500U by 14.2 percent and the 11th Gen Intel Core i7-1165G7 beats it by 22.5 percent. However, in the Cinebench R20 multi-core benchmark, it’s a very different story where AMD Ryzen 5 5500U beats its intel counterparts such as i5-1135G7 and i7-1165G7 with an impressive margin of 30 percent. Overall the Ryzen 5 5500U is comparable to Ryzen 7 4700U in terms of performance. 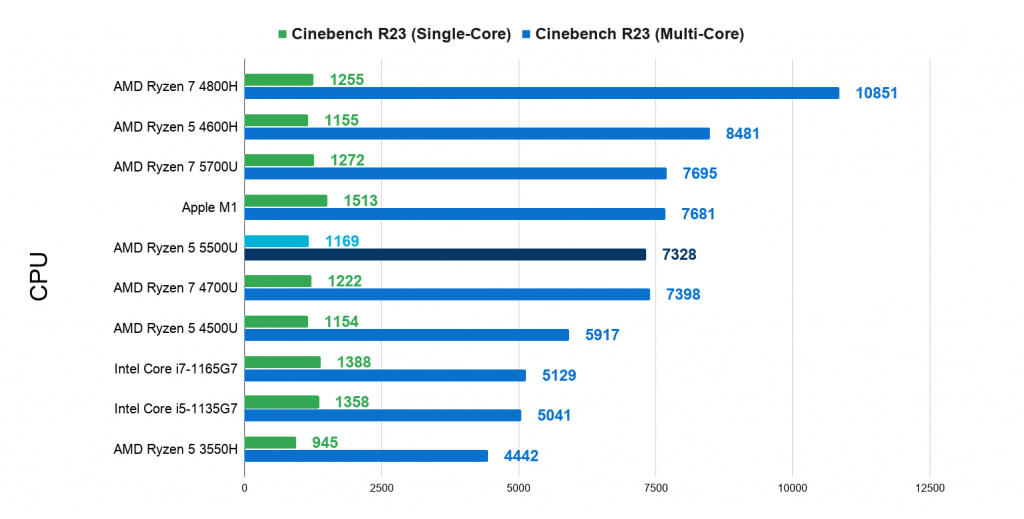 The AMD Ryzen 5 5500U is competitive with its ryzen counterparts and beats its 10th Intel Counterparts with decent margins. However, if we compare the 5500U with intel’s 11th gen offerings it is not very competitive.