Launched in January of 2021 AMD Ryzen 5 5600H is a mid-range processor for big gaming laptops based on AMD’s Zen 3 microarchitecture. The AMD Ryzen 5 5600H has 6 cores and 12 threads with a base clock of 3.3 GHz and a boost clock of 4.2 GHz. Manufactured on a TSMCs 7nm process the TDP of this Chip is as specified by AMD is 45 Watts but can vary anywhere from 35 to 54 Watt depending on the laptop. The 6 core APU comes with integrated Vega 6 graphics and supports DDR4-3200 and Low power LPDDR4-4266 RAM.

AMD’s 5000 series Cezanne chips based on its Zen 3 architecture see an average of over 19 percent IPC gains over its Zen 2 counterparts paired with an increased clock speed of 200 MHz the 5600H is significantly faster than the Ryzen 5 4600H. The Ryzen 5 5600H trades blow with the 10th Gen Intel Core i7 10875H and is significantly more powerful than the 11th Gen intel core i5 11400H and 11300H. This goes without saying it can easily handle your day-to-day tasks such as Browsing, Streaming, and using office productivity software. If your day-to-day workflow involves using video editing, photo editing, and CAD applications, the 5600H is a great option.

The performance of the Vega 6 Graphics depends on a number of factors such as the configured TDP (12-25 Watts), Clock Speed, Cooling Solution, and RAM configuration. The integrated GPU greatly benefits from fast dual-channel memory. The Renoir APUs now also support the LPDDR4x memory the giving the Renoir APU some performance. Based on the previous-gen vega architecture the only difference is the 7nm which gives the new vega GPUs a significant power boost. The New AMD Radeon RX Vega 6 (Ryzen 4000/5000 series) graphics are almost 20 percent faster than the last-gen Vega 8 (2000/3000 series). When compared to its Nvidia counterparts the Vega 6 scales above the Mx230 and comes close to Mx150 and Mx330 in terms of performance. However, this doesn’t matter as the 5600H will almost most certainly be paired with a dedicated GPU.

Now let’s look at some benchmarks of the AMD Ryzen 5 5600H against the following processors.

How is AMD Ryzen 5 5600H for 3D Animation and Rendering

We see that the AMD Ryzen 5 5600H is a great processor of 3D Animation and Rendering and performs better than i9 10980HK.

Blender is an open-source digital content creation software for 3D-Modeling, Animation, Rendering, Video Editing & Compositing Solutions on the market. Blender has its own benchmarks and is used to measure the rendering capabilities of a CPU or GPU. The following bars indicate the time is taken to render a scene ( Less is better). 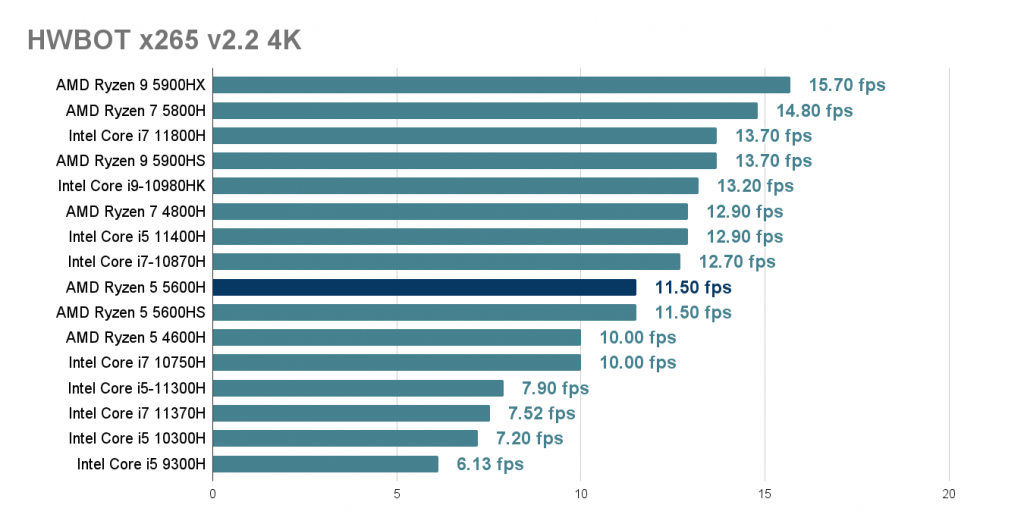 The AMD Ryzen 5 5600H is competitive with its ryzen counterparts and beats its 11th Intel Counterparts.

9th Gen Intel Core i5 9600KF (6 Cores/LGA 1151 Socket/6 Threads/4.6 GHz Boost Clock/9MB Cache) (BX80684I59600KF)
Compare
Laptopsreviewer
We use cookies on our website to give you the most relevant experience by remembering your preferences and repeat visits. By clicking “Accept All”, you consent to the use of ALL the cookies. However, you may visit "Cookie Settings" to provide a controlled consent.
Cookie SettingsAccept All
Manage consent