The i5 1135G7 by Intel is a part of its 11th Generation Tiger lake lineup as a mid-range processor for laptops. It is powered by 4 willow cove cores with 8 threads with a base clock of 2.4 GHz and 4.2 GHz. The i5 1135G7 is based on the 10+ nanometers architecture with this the 11th Gen Intel CPUs have gained double digits IPC gains (instructions per cycle). The higher IPC allows the ice lake CPUs more performance at the same clock speeds. The TDP of this Chip as specified by intel can vary anywhere from 12 to 28 watts. It also has support for new faster system memory of up to DDR4-3200, LPDDR4x-4267.

11th Gen Intel Core i5 1135G7 can easily handle day-to-day tasks such as Browsing, Streaming, and using office productivity software and is a better option for light users compared to its ryzen counterparts. Now, if we are talking about more demanding tasks such as video editing, photo editing, and 3D applications is a good option for mid-range laptops however its ryzen counterparts with more cores will perform better. The Intel Core i5 1135G7 when it comes to real-world performance is a lot better than its 10th generation counterparts especially when it comes to single-core performance which is relative to that of AMD Ryzen 5 5600H which is a 45-watt chip. However, when it comes to multi-core performance it is comparable to AMD Ryzen 5 4500U which is almost a year older than the 1135G7.

The 11th Gen Intel Core i5 1135G7 is a great processor for 3D animation and rendering. When it comes to its single-core performance it performs significantly better than its Intel/AMD counterparts however loses it to its Intel/AMD counterparts in multithreaded benchmarks. So what does this mean for i5 1135G7? Well, it simply means that while you are in your 3D viewport your experience will be very smooth and responsive. However, task rendering tasks may take a lot longer than its competitors.

Blender is an open-source digital content creation software for 3D-Modeling, Animation, Rendering, Video Editing & Compositing Solutions on the market. Blender has its own benchmarks and is used to measure the rendering capabilities of a CPU or GPU. The following bars indicate the time taken to render a scene ( Less is better).

Based on cinema 4d the Cinebench R20 measures CPU performance in animation, 3d-modeling, simulation, and rendering. Single-core performance measures the responsiveness of the software under active workloads. Here we can see that Ryzen 7 5700U loose to its 11th Gen intel counterparts in single-core performance with a decent margin. Though the performance here not bad it’s fairly decent and your overall experience will be smooth.

As we can see here the 11th Gen Intel Core i5 1135G7 in terms of single-core performance beats not only its 10th Gen counterparts but also handily beats its Ryzen 4000 and 5000 series counterparts. 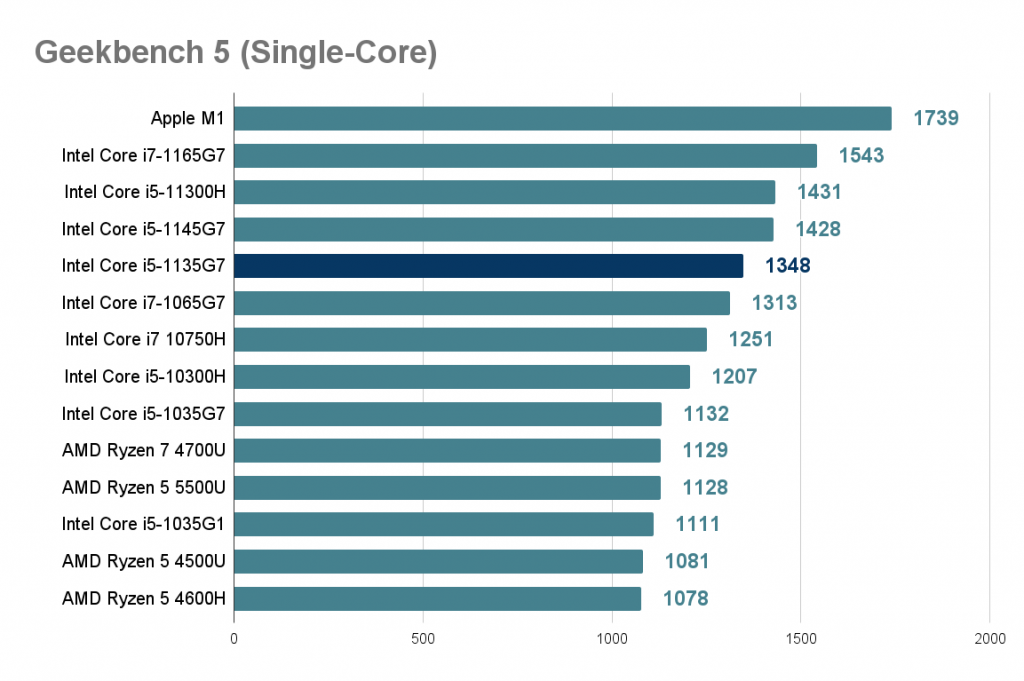 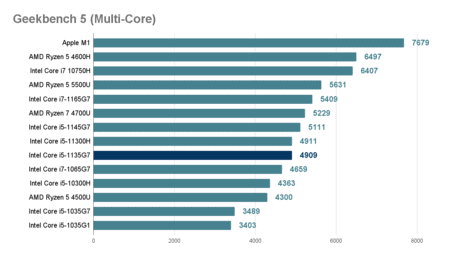 WebXPRT 3 is a benchmark for browsers and compares the performance of almost every web-enabled device. You can use this benchmark to measure how well your device will perform day-to-day tasks such as Photo Enhancement, Organize Album Using AI, Stock Option Pricing, Encrypt Notes, OCR Scan, Sales Graphs, and Online Homework. When it comes to web browsing the i5 1135G7 surpasses its ryzen counterparts.