Add to compare
Add your review
306Benchmarks and ReviewCPU

intel.com
See it
*Disclaimer: The price & specification of the given product may differ from the actual product. Please confirm on the retailer's website before buying.
Last updated on July 25, 2021 10:46 pm

The i9 11980HK is an eight-core processor for gaming laptops and SoC for gaming laptops. The i9 11980HK has 8 willow cove cores and 16 threads with a base clock of 2.6 GHz, which can be boosted to 5 GHz. The chip is based on the Tiger Lake H45 generation is manufactured on a 10+ nm superfin process. Other Key specs include 24 MB of L3 cache and support for DDR4-3200 memory and 4266 MHz of LPDDDR4 RAM. The Integrated GPU here is Intel UHD Graphics Xe 750 with 32EUs (32 active compute units)

Also, Tiger Lake SoCs adds PCIe 4 support, Deep Learning Boost technology by intel for faster AI-based computing, and the integration of WiFi 6, Thunderbolt 4, USB 4, and PCIe 4 support. According to  Intel, the default TDP (PL1) of 11980HK is 45 Watts however, the TDP can be configured at 65 Watts which increases the base clock to 3.3 GHz, and for a short period of time with PL2, the TDP of the chip can go up to 107 Watt with the base profile and 135 Watt with performance profile.

The 11th Gen Intel Core i9-11980HK in terms of performance goes toe to toe with AMD Ryzen 9 5900Hx/5980Hx and with 19 percent gen on gen performance gains over 10980HK which simply means it is one of the best CPUs out there for laptops and will absolutely crush video editing, photo editing, and CAD workloads.

The Xe 750 Graphics based on the intel’s Xe architecture sees a massive improvement in its performance and is capable of playing modern AAA titles at 40+ FPS but only at low settings. However, for any laptop which comes integrated with the 11th Gen Intel Core i9 11980HK, this shouldn’t be a problem as any laptop that has the 11980HK will be paired with a dedicated graphics solution.

Here we will be comparing the 11th Gen Intel Core i9 11980HK against the following processors.

We see that the 11th Gen Intel Core i9 11980HK is an excellent processor of 3D Animation and Rendering and comparable to AMD Ryzen 9 5900Hx/5980Hx making it one of the best processors for 3D rendering and animation that you can find on a laptop.

11th Gen Intel Core i9 11980HK is close to desktop-level performance in blender benchmarks and sits between the 5900Hx and 5980Hx in terms of performance. Compared to its predecessor i9-10980HK the i9 11980HK is almost 20 percent faster.

Based on cinema 4d the Cinebench measures CPU performance in animation, 3d-modeling, simulation, and rendering. Single-core performance measures the responsiveness of the software under active workloads.

When it comes to the Cinebench R20 and R15 single-core benchmarks 11980HK goes toe to toe with its competition. However, if we look at the latest version of cinebench the cinebench r23 benchmark we can see in single-core performance 11980HK the best mobile CPU out there and trades blows with desktop level CPUs.

When it comes to the Cinebench R20 and R15 single-core benchmarks 11980HK goes toe to toe with its competition with it losing to AMD 5900Hx with the slightest of margins. However, if we look at the latest version of cinebench the cinebench r23 benchmark we can see in multi core performance 11980HK the best mobile CPU out there and trades blows with desktop level CPUs. 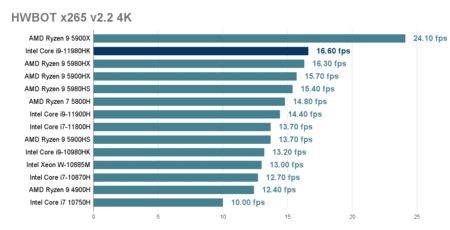 In Geekbench 5, as we can see the 11980HK performs better than AMD Ryzen 9 5900Hx in both single and multi core performance. 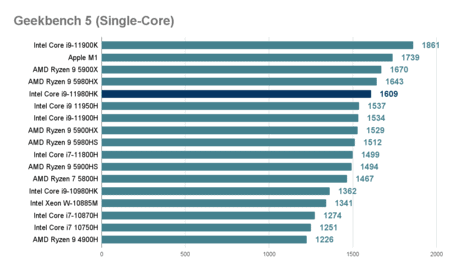 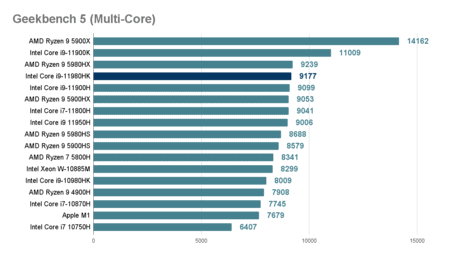 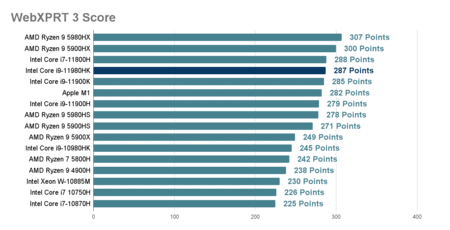 Intel Celeron N4120
Compare
We use cookies on our website to give you the most relevant experience by remembering your preferences and repeat visits. By clicking “Accept All”, you consent to the use of ALL the cookies. However, you may visit "Cookie Settings" to provide a controlled consent.
Cookie SettingsAccept All
Manage consent