The Ryzen 5 4600G is an exclusive OEM-only Chip by AMD for desktops. Based on AMD’s Zen 2 architecture the 4600G was launched in July of 2020. The 4600G has a performance slightly better than the 4600H. The 4600G has 6 cores and 12 threads with a base clock of 3.7 GHz and which can be boosted to up to 4.2 GHz. The chip is based on the Zen 2 microarchitecture is manufactured on a 7 nm process by TSMC. The TDP of this Chip is specified by AMD to be at 65 Watts and comes integrated with Vega 7 Graphics.

AMD Ryzen 5 4600G is more than enough for your day-to-day tasks such as Browsing, Streaming, and using office productivity applications with plenty of room for multitasking. Now, if your day-to-day workflow involves using video editing, photo editing, and 3D applications the 6 core AMD Ryzen 5 4600G is a very capable processor and should easily be able to handle such workloads. 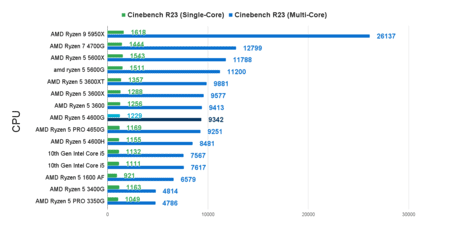 The AMD Ryzen 5 4600G is powered by the Vega 7 Graphics which has a performance comparable to that of Nvidia Mx250 with 2GB of graphics memory and slightly below Vega 8 graphics and is capable of gaming at the medium setting with decent frame rates. That being said performance of the Vega 7 Graphics depends on a number of factors such as the configured TDP (12-25 Watts), Clock Speed, Cooling Solution, and RAM configuration.